This document is based on the definitions and requirements for restore logic outlined in new-idea-for-extension-cases.md.

Important terms from that document that are also used in this document:

A case is available if

A case is live if any of the following are true:

Since cases are sharded by case ID… 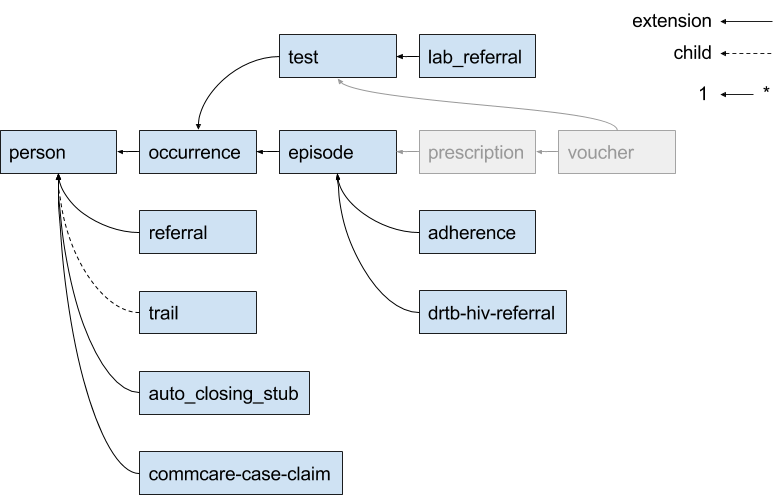 With the current sharding (by case ID) configuration, the maximum number of queries needed to get all live cases for a device is 5 because there are 5 levels in the case hierarchy. Update: this is wrong; it could be more than 5. Example: if a case retrieved in the 5th query has unvisited children, then at least one more query is necessary. Because any given case may have multiple parents, the maximum number of queries is unbounded.

Algorithm to minimize queries while sharding on case ID¶

All queries below are simplified for the purposes of demonstration. They use the simplified table definitions from the Data Structure section in this document, and they only return case IDs. If this algorithm is implemented it will likely make sense to expand the queries to retrieve all case data, including case relationship data, and to query directly from CommCareCaseIndexSQL and CommCareCaseSQL.

The term “child” is a general term used to refer to a case that is related to another case by retaining a reference to the other case in its set of parent indices. It does not refer to the more restrictive “child” relationship type.

get_cases_owned_by_device() retrieves all open cases that are not extension cases given a set of owner IDs for a device. That is, it retrieves all live cases that are directly owned by a device (user and groups). The result of this function can be retrieved with a single query:

get_related_cases() retrieves all live cases related to the given set of live case IDs. The result of this function can be retrieved with a single query:

Each of the above queries is executed on all shards and the results from each shard are merged into the final result set.

One query to rule them all.¶

Objective: retrieve all live cases for a device with a single query. This query answers the question Which cases end up on a user’s phone? The sharding structure will need to be changed if we want to use something like this.